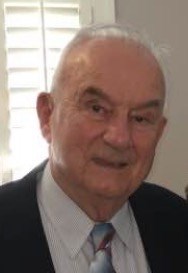 Bud was born in Lincoln, NE on July 17, 1930 to the late Leroy James and Helen Louis Brown. Bud ran away to the horse races when he was only 13, but later received his GED. He attended college classes while in the Army and at Odessa College. He married Mary Elizabeth Conradt on May 3, 1952 in Beatrice, NE. They were married for 62 years, until Mary's death on October 6, 2014. Bud married Jane Faber on September 30, 2017 in Durham, NC. They were happily married for 4 years.

Bud enlisted in the U.S. Army at 17, in 1947. He served almost 3 years in Korea and Japan in the 7th Infantry. From 1954 to 1966, Bud served in various assignments while steadily moving up the ranks from Private to Sergeant, to 1st Sergeant, to Sergeant Major in Fort Riley, KS, Fort Leonard Wood, MO and St. Cloud, MN. Bud was promoted to Captain in 1966. He served in Vietnam for almost 1 full year with the 47th Infantry, 9th Division. During the Tet Offensive in January 1968, Captain Brown and his convoy delivered much needed fuel and ammunition to rifle companies in Bien Hoa City, which was still burning under enemy attack. Bud retired from the Army in 1968. His military awards include: Purple Heart and two Army commendation medals. He has been nominated to receive the designation of Distinguished Member of the 47th Infantry Regiment from the Department of the Army in April of 2022.