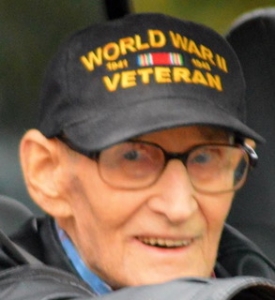 It is with deep sadness that we announce that John Talton Crutchfield, age 98, our Chaplain and a founding member of Joe Wagner Post 7313, died Sunday, December 18, 2016 at Twin Rivers Independent Senior Living.

Mr. Crutchfield served his Country in the United States Army earning a Victory medal in WWII while in The Battle of the Bulge.

The family will receive friends Wednesday, December 21, 2016 from 1PM to 2PM at Pittsboro Baptist Church. The Funeral Service will follow at 2PM with Rev. Tripp Harmon presiding. Burial will follow in the Church Cemetery with Military Rites. Post members planning to attend should wear their VFW uniform caps.
In lieu of flowers, the family asks that donations be made to UNC Hospice P.O. Box 1077 Pittsboro, NC 27312.